Resistance to a military base on the island of Jeju (South Korea) are at a critical stage.  One of the leaders of the protest movement Professor Yang was arrested and has been on a hunger strike for 50 days.  Another artist and activist Sung Hee Choi was recently arrested for holding a banner at the construction site. She is also on day 7 of her hunger strike.  Apologies to Jean Downey of Ten Thousand Things Blog for reposting her entire article on the situation.  There are action steps at the bottom of her post. Please send a message of concern and protest to the Korean Embassy.   Mahalo:

Write to the S. Korean Ambassador: Ask for the halt of destruction of Gangjeong, Jeju Island & release of environmentalist & pro-democracy activists 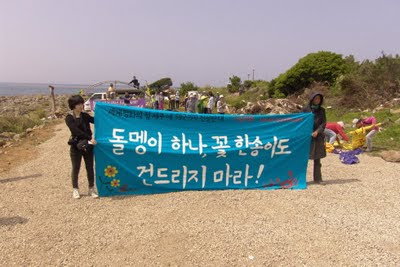 ( Sung-Hee Choi holding a banner challenging the destruction of Gangjeong, Jeju Island. The sea off its coast is the only natural dolphin habitat in South Korea. The banner reads “Do not touch even one stone, even one flower!” Image: No Base Stories of Korea)

Art teacher and peace blogger Sung-Hee Choi has been arrested and detained with seven other people at Jeju Island for nonviolently protesting the South Korean government seizure of property belonging to 1,500 villagers in Gangjeong, Jeju Island, South Korea, and the destruction of this property on the Gangjeong coast to make way for a navy base intended to house destroyers equipped with missile systems.

Here is the most recent post at Sung-Hee’s blog, No Base Stories of Korea:

Sung-Hee Choi, the manager of this blog was arrested on May 19th during the nonviolent opposition demonstration at the site of the planned naval base construction in Gangjeong village. At the time of her arrest, Sung-Hee was holding a banner with the message printed on it:

Do not touch even one stone, even one flower!

On May 21st, a warrant was issued for her arrest and she is, as of May 23rd, detained in jail at the East Police Station on Jeju Island.

Sung-Hee Choi was arrested for simply holding the banner. She did not do anything to obstruct the South Korean government’s destruction of the Gangjeong villagers’ property. 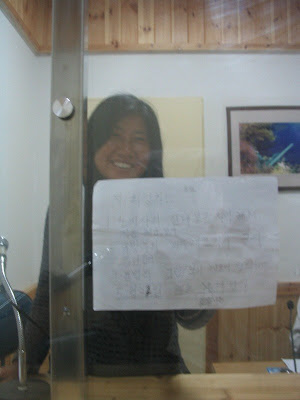 On May 19, Sung-Hee joined Prof. Yang’s hunger strike. Today is the 7th day of her fast in prison.

Here are her 3 requests:

1. Cancellation of the annulment of the absolute preservation area by the Jeju Providential Governor’s authority
2. The Ministry of National Defense halt of destruction of Gangjeong to construct a naval base on Jeju.
3. Support in protest of her illegal detention and isolation:

Witnesses attest that all that SungHee did was hold a banner that said “Do not touch any stone or any flower” at the protest. One of activists working with her said Sunghee loves Mother Nature very much; that is why she is against the naval base construction.

She will be moved to Jeju prison soon from the detention cell at the police station.This is the second time she has been taken to prison. She will be arraigned this time. Sung-Hee has been taking a very important role communicating the South Korean government’s seizure and destruction of private property at Gangjeong village on Jeju through her blog and international network. We hope she will be released soon.

Meanwhile the movie critic, Prof. Yang, has still been fasting. Many people are worried about his condition and have tried to persuade him to changestop fasting. But his will to stop the naval base construction is strong and clear.

WRITE THE KOREAN AMBASSADOR TODAY AT THIS WEBSITE (in the U.S.): http://www.dynamic-korea.com/embassy/meet.php

Here is our sample letter:

I am writing about the arrest of nonviolent environmentalist and property rights activists protesting the South Korean’s planned destruction of the Gangjeong coast to make way for naval base on Jeju Island. I urge you to petition the government of the Republic of Korea to release these people and to stop the construction of the naval base which would devastate one of the most beautiful areas of Jeju Island and the only natural dolphin habitat in the Korean peninsula.

Naval bases have created environmental damage wordwide. Pearl Harbor and Yokosuka ar polluted with toxins, including nuclear radiation. Jeju Island is celebrated for its environmental beauty. Damage resulting from the construction of the naval base on Jeju Island will ruin Jeju’s status as one of the world’s last remaining ecological wonders. The villagers of Gangjeong have never given their approval for this destruction. Ignoring their wishes means trampling on property rights and democratic process.

Please support environmental protection and democracy in Jeju Island: speak against a proposed naval base that could destroy everything that draws tourists to Jeju Island and Korea and call for the release of the Jeju Islanders jailed for protesting confiscation of private property and the destruction of Jeju’s ecological treasures.

Here is our post on SPARK’s and Pax Christi International’s February, 2010 action request.

Bruce Gagnon has undertaken and is calling on others to join a solidarity fast on behalf of Professor Yang, a Jeju Island resident heartbroken over the planned military destruction of Gangjeong. The Jeju Island police have detained the renowned film scholar for 2 months in prison where he has been on a hunger strike; now nearing death. Information and more suggestions for action at Organizing Notes: Organizing Notes.